Rare earth rich intermetallic compounds of the type R3T (R = rare earth, T = transition metal) are found to be very intersting class of materials as far as their complex magnetic structure is concerned. Tb3Co is one such compound that orders antiferomagnetically below TN = 84 K and undergoes a first order transition below ~72 K (TFO). In spite of the several studies attempted on this compound a sharp phase transition like feature (seen in ZFC magnetization) around 30 K was never got any proper explanation

From our temperature dependent neutron powder diffraction data it was found that the magnetic structure of this compound below 70 K remains unchanged. Rietveld refinement analysis confirmed that the phase transition like feature is mainly associated with the change in strength of the spin-lattice coupling from weaker to stronger with decrease in temperature and it was never a real phase transition. Besides, the analyses of the frequency dispersed linear and non-linear ac -susceptibility data confirms that the magnetic state below TFO is coexisting with a spin-glass like phase. However, an attempt was made to reduce the complexity of the magnetism in this compound by partially substituting the non-magentic yttrium in the atomic site of Tb but in turn a very differnt magnetic scenario was observed. Further, this spin glass like behaviour in Tb3Co persists even in the presence of external pressure up to P ~ 1 GPa although the glassiness was found to be weakened enough at P = 0.69 Gpa. Any furhter increase in pressure has negligible effect on the glassiness. However, the application of pressure shifted the transitions to lower temperature (TN by 6 K, TFO by 15 K, low temperature transition like feature by 3 K) and pressure was also found to modulate the magnetic structure. In addition, the magnetocaloric effect (MCE) of Tb3Co was improved by 37% in presence of pressure. Interstingly other R3T compounds (Ho3Co, Dy3Co, Dy3Ni) was also examined and it was observed that R3T exhibit highly complex magnetic strucuture. The degree of complexity also varies with different R atom. The spin glass like state is found to be present in all these compositions coexisting with long range magnetic order. This feature sustains even in presence of external pressure up to 1 Gpa. Low symmetry crystalline electric field plays a crusial role in magnetism of these materials. R3T compounds can be used as potential magnetocalric material and the enhancement in MCE in Tb3Co with pressure can be realized in practice by some suitable chemical substitution. 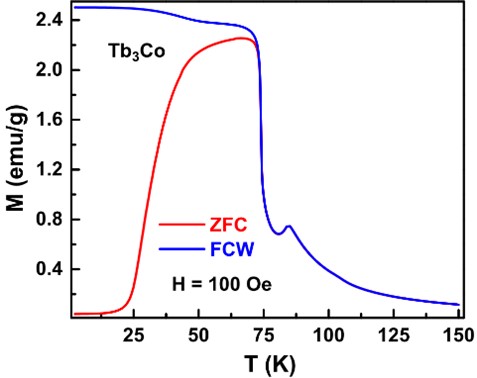