Here is a list of several steps you typically need to go through with twoBeamGUI (see below) if you are after some more or less reliable results. 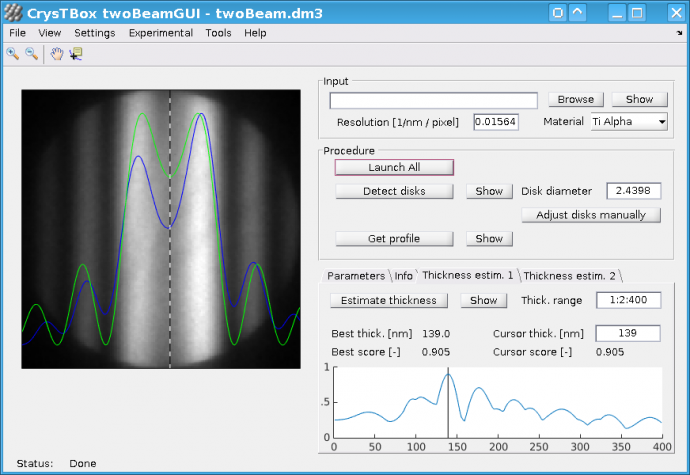 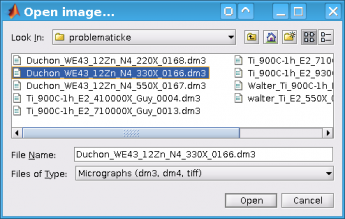 In order to demonstrate how twoBeamGUI operates, a sample image is provided and loaded by default. This allows you to just press (described below) and see the correct results in a moment. Your own diffractograms can be loaded using the button in the panel or via the menu . Either way leads to a dialog box (see aside). 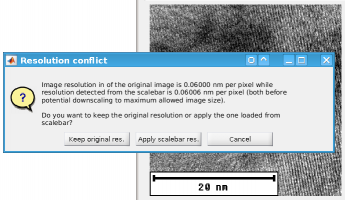 If the image contains metadata with the image resolution, it is loaded and can be seen in the panel. Otherwise, you have to specify the resolution manually.

You can let twoBeamGUI to parse scalebars burnt into the image via . If the scalebar is read successfully, resolution is calculated and after you check it, it can be applied. If there is a conflict between the scalebar resolution and the value stated previously in the GUI, you will be notified and given a choice of whether to use one or another.

Note: The scalebar should be eliminated if it might mislead the circle detector from the transmitted or diffracted disk. One of the ways how to eliminate it is to perform the scalebar detection even though the resolution is known from the metadata. 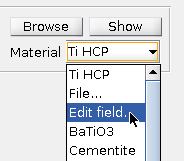 The sample material can be changed at any time during the analysis. Details about material database and selection can be found here.

The whole analysis can be launched at once using the button. The individual procedure steps represented by the buttons below are then carried out consecutively. After the whole procedure has been finished successfully, the final results are presented. Each step can be re-launched at any time by pressing respective button below the button. Partial results of individual steps can be shown via corresponding buttons aside. It is advisable to check the partial results to verify relevance of the final findings. Below, the individual steps and expected results are discussed in detail. 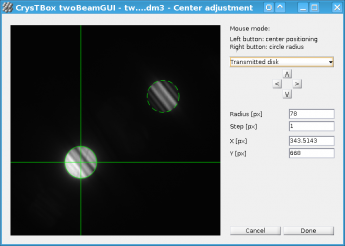 To localize the depicted disks, press the button . The tool should automatically determine the diameter and position of two disks. If the detections represented by green circles are misplaced, press and adjust disk positions manually using the GUI (see aside).

Check: Press the button next to to check position and radius of the detected disks. Also check the and in the panel. If they are obviously incorrect, set the correct extinction distance using the edit field in the tab. 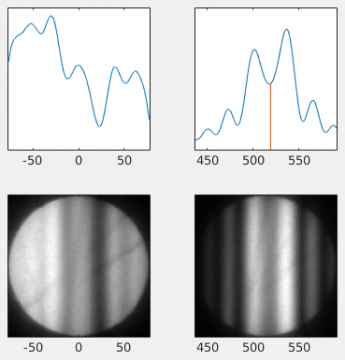 Consequently, the disks content can be cropped out, and a profile across the transmitted and diffracted disk can be measured using the button .

Check: Press the button next to to check the disks are localized well and profiles are measured correctly. 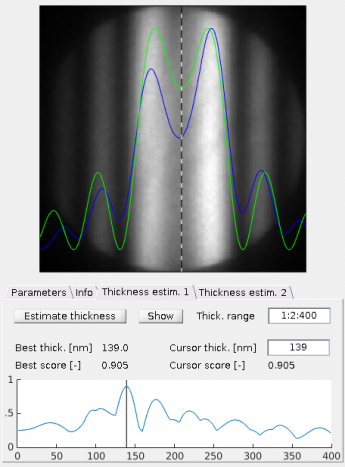 Now the thickness can be estimated using controls in the tab . After pressing the button the measured profile across the diffracted disk is compared with the theoretical profiles corresponding to the thicknesses specified in the edit fileld. By default, the examined thicknesses ranges from 1 to 400 with a step of 2 (which leads to 1, 3, 5... 395, 397, 399 nm). For each theoretical profile a similarity to the measured profile is calculated and all those similarity measures are plotted as a function of thickness (see aside). Initially, a cursor (the black vertical line) is positioned at the thickness of the highest similarity with corresponding thickness value being stated above the plot. In the input image, you can see the diffracted disk (see aside) together with the measured intensity profile (in blue) and the theoretical profile corresponding to the cursor thickness (in green). The cursor can be moved along the thickness range, allowing the user to inspect how the two profiles match for various thicknesses.

Check: Check how the measured (blue) and theoretical (green) profiles agree for the estimated thickness. Move the cursor to inspect how the profiles match for two or three other high peaks to make sure the thickness estimate is sound.