The laboratory of X-ray microanalysis provides all Institute service. It offers qualitative as well as quantitative elemental analyses of solids based on X-ray emission spectroscopy. (EPMA-Electron Probe Micro Analysis).

This method enables to analyse elements from B to U with space resolution of about 1m3. Our laboratory has to disposal Electron Probe X-ray MikroAnalyzer (EPMA) JXA-8230 of JEOL.

It is equipped with five wavelength dispersive (WD) and two energy dispersive (ED) X - ray spectrometers. This instrument enables fast qualitative analysis as well as an accurate and precise quantitative analysis with a detection limit of the order 100 ppm.

We can perform not only a selected point analysis but also elemental maps and line profiles can be gained, thanks to possibility to scan the surface of the sample by the electron beam, Scanning of the electron beam provides also imaging of the surface topography using secondary electrons or back-scattered electrons with lateral resolution up to 5 nm.

This method is applicable for wide range of materials, for example metals, semiconductors, superconductors, ceramics, minerals etc. Due to using a special software, it is possible to analyse also thin films.

The X-ray microanalysis is based on a spectrometry of X-rays that are generated by the interaction of the focused beam of primary electrons with the sample. Fast primary electrons with energy of several keV can transfer a part of their energy to shell electrons in the atoms of the examined matter. Such electrons are released from their shells creating a vacancy in it so that the atom is ionised. The ionised atom persists only very short time and very fast relaxes by jumping of electrons from higher shells into the vacancy shell. The originally absorbed energy is released as a photon with energy equal to the difference between energies of responsible atomic shells. For defined couple of energy shells this energy is characteristic for each element. Thanks to high energy of primary electrons, the electrons on inner atomic shells are ionized, and that is way the energy of photons is not influenced by valence bonding and consequently by chemical composition. It results in relative simple atomic X-ray spectra what enables reliable identification of elements in an examined sample. In addition to the discrete characteristic X-ray, continues radiation (so called Bremsstrahlung) is detected. This radiation is generated by deceleration of fast primary electron in electric field of the atomic nucleus (similar to synchrotron radiation). 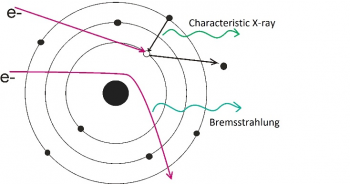