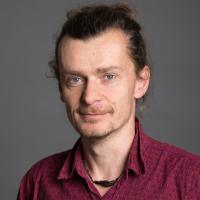 Leader of the Thin films for photovoltaic applications group. He received the Ph.D. degree in Physics from the Faculty of Mathematics and Physics, Charles University in Prague 2009. He was subsequently postdoctoral researcher at the Ecole Polytechnique Federale de Lausanne (EPFL), Neuchatel, Switzerland 2013-2014. His research interests are mainly focused on structural and opto-electronical characterization of silicon and hybrid halide perovskites thin films by spectroscopic techniques (Raman, FTPS, PDS, PL) and by high resolution imaging of electrical properties by AFM/SEM. He was awarded by Otto Wichterle award for young scientists in 2013 and by Award of the Chair of the Academy of Sciences of the Czech Republic and the Neuron fund for the popularization of science in 2017.