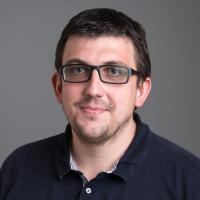 The main research topic is the project ATLAS ITk, which goal is a complete replacement of the current inner detector of the ATLAS experiment by the new "full-silicon" inner tracker. The current inner detector of the ATLAS experiment has been designed to be able to detect charged particles produced by the LHC accelerator, that is accelerating protons with the total energy close to 14 TeV and the peak luminosity of 1.0E34 cm-2s-1 leading to the average number of 23 proton-proton collisions per bunch crossing, for more than 10 years. However, during the long technical shutdown between 2025 and 2027, the LHC accelerator will be upgraded to the High-Luminosity LHC (HL-LHC) machine. The peak luminosity at the HL-LHC is expected to be close to 7.5E34 cm-2s-1, corresponding to approximately 200 proton-proton collisions per bunch crossing, while the integrated luminosity accumulated in 10 years of HL-LHC operation should reach 4000 fb-1. The above specified parameters of the HL-LHC accelerator are thus very demanding on the characteristics of new ATLAS inner tracker, especially on the radiation hardness of this tracker, which will have to withstand total fluencies close to 2E16 neq/cm2, but also on the granularity that will be increased ten times compared to the current ATLAS inner detector. As the new ATLAS inner tracker will be composed of the pixel and strip subdetectors, the ATLAS ITk project is also formally split into pixel and strip subprojects. The Institute of Physics of the Czech Academy of Sciences is participating almost exclusively on the strip part of the project.

The Institute of Physics committed to test 4500 strip silicon sensors of the End-Cap type during the pre-production and production phases of the ATLAS ITk project. At the same time, our research group of the development and testing of strip silicon detectors is intensively participating in the development of new radiation hard silicon detectors for future particle accelerators. All testing of strip silicon sensors is performed in the new Clean laboratory for testing of silicon particle detectors. The total area of this clean laboratory is 52 m2. The class of laboratory cleanliness is ISO 7 according to ISO 14644-1 standard. The laboratory is also completely ESD safe.

The most important measurement instrument present in the laboratory is the so-called probe station, which enables us to contact the individual testing pads of the studied samples and perform the required electrical tests on these samples. Currently, the clean laboratory is equipped with two of these probe stations, the older one Karl Suss PA 200 and the completely brand new one Tesla 200 mm. The mechanical properties of the strip silicon sensors are measured with the OGP SmartScope CNC 500 metrology station. When the sensors are not measured, they are stored in the special dry storage cabinet MP Dry Cabinet IV ST, in which the inert nitrogen atmosphere and the relative humidity below one percent is kept. Electrical characteristics of irradiated sensors need to be tested at temperatures below -20 °C to avoid uncontrolled changes in the structure of silicon damaged by the irradiation. For testing at low temperatures the special cold testing setup can be used, when the tested samples are wire bonded on the dedicated testing structures by using either the automatic wire-bonding station F&S Bondtec Series 58XX or the manual wire-bonding machine Delvotec 5330. The wire-bonded samples are then tested either in the freezer or in the environmental chamber Binder MK 56. Electrical characteristics of the irradiated sensors can be measured also in the probe station Tesla 200mm, which is able to cool down the sample to the temperature reaching -55 °C.