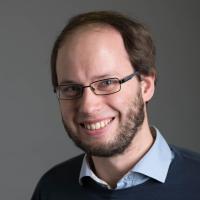 Broadly speaking, I’m working in the field of time-resolved vibrational spectroscopy. This is a group of techniques where we investigate the characteristics, such as energy levels, of back-and-forth movement of atoms in molecules using very short laser pulses. From the results, we can draw conclusions about the overall structure of the molecules, as well as structural changes when they absorb light. More specifically, I take part in building the time-resolved infrared spectroscopy setup at ELI Beamlines and develop computational tools to analyze the data from this setup and the femtosecond stimulated Raman spectroscopy setup. The two techniques are complementary, such that vibrational processes that are invisible to direct study with infrared light are possible to follow with Raman spectroscopy (which uses visible light) and vice versa. In addition, I maintain an interest in time-resolved electronic spectroscopy, which uses visible and ultraviolet light to create and follow transitions between electronic energy levels.
Some topics I am particularly interested in are time-resolved infrared spectroscopy as a tool to track noncovalent, weak bonds in proteins; movement and other dynamics of carriers of electric charges, such as electrons, in novel solar cell materials; and 2D spectroscopy, which uses a series of laser pulses to increase energy resolution without sacrificing time resolution, as well as pinpointing couplings between specific pairs of energy levels.
Among these topics, a few recent results can be mentioned. One is about semiconductor crystals a few nanometers in size, also known as quantum dots, which are potential solar cell materials. Using time-resolved 2D electronic spectroscopy, we followed the relaxation of charge carriers after quantum dots absorb light. With 2D spectroscopy, we can distinguish the closely spaced electronic energy levels in the quantum dots with high time resolution.
Another recent result concerns a phytochrome, a protein that plants, bacteria and fungi use to detect light. Light is absorbed at a small group of atoms in the protein, which starts a domino effect of structural changes that eventually leads to a chemical signal. We studied what happens when a specific bacterial phytochrome absorbs light with infrared spectroscopy and other methods and showed that two water molecules are involved in transmitting the light signal from the light-absorbing group to the rest of the protein.