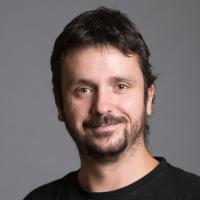 My work deals with cosmic rays – that is, energetic particles from space – both from theoretical and experimental point of view. From the theoretical side I focus on simulations of interactions of primary particles of the highest observed energies in Earth’s atmosphere during the production of air showers, which are the only phenomenon allowing us to detect such energetic particles. Comparing the current simulations with data of the large international observatories, particularly of the Pierre Auger Observatory, the largest experiment in the field – in which our group actively participates – shows that these simulations aren’t an exact reflection of reality. As the energies of the nuclear interactions involved are several orders of magnitude beyond the capabilities of man-made accelerators, there is always some extrapolation involved, in particular because a fundamental theory which would allow first-principle predictions of results of such collisions is not known. Using computing resources of the FZU and other sources, we are trying to determine the span of the parameter space allowed by the accelerator data and whether we can replicate the observed behavior within its boundaries or some new physics is required.
In order to have any data to interpret, care must be taken also of the experimental side of the problem. The Prague group has a long tradition in the field of atmospheric monitoring, which is a key activity within the whole field of ultra-high energy cosmic rays. Due to their low flux, such particles are invariably observed indirectly and their main manifestation – atmospheric showers – are observed from a large distance, often using optical instruments, where the transport of light from the shower to the detector is affected by local atmospheric transparency. One of the methods to measure the absorption of light in the air is using stars as reference sources – unlike other methods based on laser light, no extra light is produced, thus limiting the interference with the observations. For such monitoring at the Pierre Auger Observatory, we have been, for many years, operating the FRAM robotic telescope, where I am responsible for operations, modernization and data processing.
The primary task of the FRAM is to follow-up on unusual showers detected by the fluorescence telescopes of the Observatory to determine whether such observation isn’t just a manifestation of the presence of (potentially very thin) clouds. However, as I was able to prove in the recent years, FRAM is also capable of a precise measurement of the overall aerosol contents of the air. This value can already be measures at Auger using other methods, but our method of measurement using starlight has quickly found application at the Cherenkov Telescope Array (CTA) project. CTA will be an observatory focused on high-energy primary photons, but the fundamental principle of detecting distant air shower is the same as in the case of cosmic rays. Unlike at Auger, the vastly different geometry of operation of CTA does not allow a practical use of laser-based methods without interrupting the observations altogether – and that is exactly the situation where the stellar photometry is a great alternative. With colleagues from the Department of Astroparticle Physics we have developed three FRAM prototypes for CTA and deployed all of them at the future CTA sites, where they undergo testing and collect data for the characterization of the sites in order to speed up data processing in the future.