Experts from the Institute of Physics of the Czech Academy of Sciences, the Faculty of Mechanical Engineering of the Czech Technical University in Prague and Westinghouse have developed a new method of surface protection of zirconium cladded fuel elements that involve gas phase deposition of anti-corrosive polycrystalline diamond (PCD).

Zirconium cladded fuel elements coated with PCD layers were selected by Westinghouse as potential candidates for Accident Tolerant Fuel in commercial reactors. Since February 2017, PCD coating has been tested in an active nuclear research reactor in Halden, Norway. If the PCD layer coating passes all required tests, it will be used as effective anti-corrosive protection of fuel elements in nuclear reactors as soon as 2020. 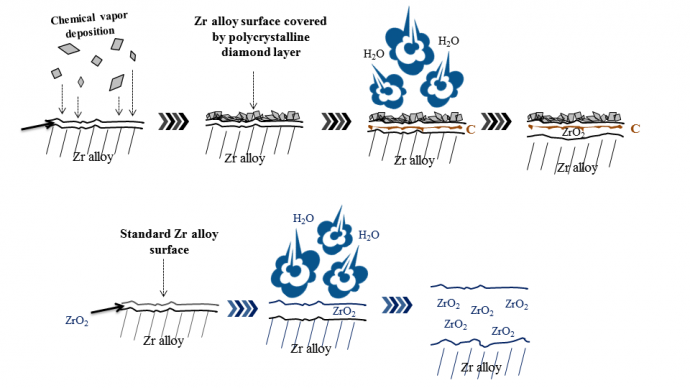 PCD coating significantly reduces corrosion of zirconium cladded fuel elements both in standard and in severe accident conditions when the temperature rises up to and above 1000°C. The coating was tested after simulations of standard and accident conditions of a nuclear reactor in the facilities of the Czech Technical University in Prague, University of Chemistry and Technology in Prague, the Institute of Physics of the Czech Academy of Sciences, Karlsruhe Institute of Technology and Westinghouse Electric. Long-term exposure tests at Westinghouse Electric autoclaves have shown that PCD coating reduces oxidation up to 40%. This significant improvement in corrosion resistance of the zirconium cladding prolongs the life cycle of nuclear fuel elements and may thus lead to immense economic and environmental benefits.

Unlike conventional methods of anti-corrosive coating of Zr alloy surfaces with layers of minimal permeability, the non-homogeneous PCD layers prevent corrosion of Zr alloys in a more complex way. PCD consists of two distinct carbon phases, namely hard diamond and soft graphite phase. The coating is therefore both hard and flexible and can thus withstand the extremely high temperatures during the nuclear reactor operating cycle. In addition, the PCD coating not only prevents direct contact of Zr alloy surfaces with the surrounding environment but as its carbon atoms enter the substrate it also impedes the corrosion process.

Scientists from the Institute of Physics of the Czech Academy of Sciences, Westinghouse and the Faculty of Mechanical Engineering of the Czech Technical University in Prague started developing this groundbreaking way of nuclear fuel element protection in 2013. In March 2015 they were granted a Czech patent and registered a patent application in the international PCT database. In 2016, applications were filed with the patent offices in the EU, USA, Japan and South Korea.