Focused x-ray laser beam is capable of creating unique phases of matter; specifically very dense plasma yet with rather low temperature. Physicists call it warm dense matter (WDM). WDM can be created by optical lasers but only in very specific and restricted conditions. X-ray lasers, on the other hand, can be used for WDM creation in much broader variety of conditions because of their ability to warm up the whole volume of the energized matter and not only the surface as optical lasers do. WDM in space can be found in cores of giant planets (such as Jupiter) or another space objects (eg. brown and white dwarfs). Regarding current issues on Earth WDM plays important role in inertial thermonucler fusion where it originates in the process of thermonuclear fuel compression.

As a part of an international team lead by specialists from Université de Paris we have studied a solid-to-WDM transition by irradiating Al foils with the FLASH free electron laser at intensities up to 1016 W/cm2. Intense XUV self-emission shows spectral features that are consistent with emission from regions of high density, which go beyond single inner-shell photoionization of solids. Characteristic features of intrashell transitions allowed us to identify Auger heating of the electrons in the conduction band occurring immediately after the absorption of the XUV laser energy as the dominant mechanism. A simple model of a multicharge state inverse Auger effect is proposed to explain the target emission when the conduction band at solid density becomes more atomiclike as energy is transferred from the electrons to the ions. This allows one to determine, independent of plasma simulations, the electron temperature and density just after the decay of crystalline order and to characterize the early time evolution. 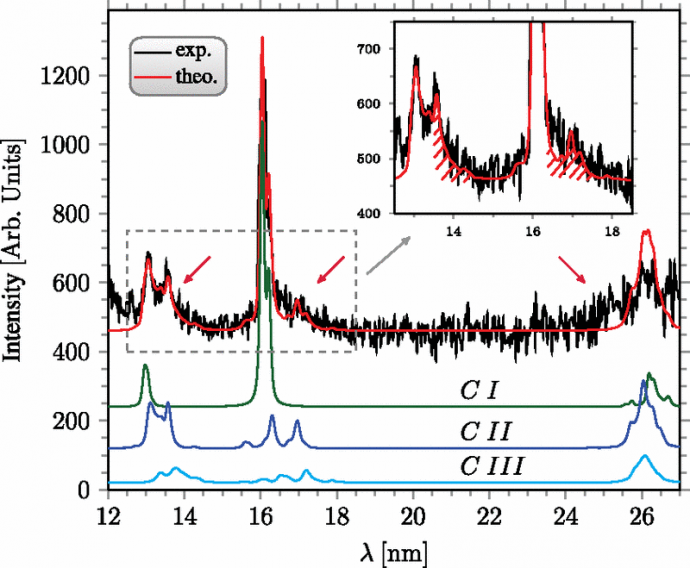 Emission spectra (black line) taken at best focus. The arrows indicate the discrepancy between the data and simulation of the Al IV emission (CI). The overlaying (red) curve is the best fit obtained including also the emission from the L-hole states (CII and CIII). The genetic algorithm identifies CI emission at Te=8  eV, whereas for the CII, CIII emission Te=25  eV. Curves CI–CIII are offset for clarity.