we would like to invite you to the seminar of Division of Elementary Particle Physics of Institute of Physics, presented by our special guest, Dr. Martin Venhart, Vice-president of the Slovak Academy of Sciences.

Odd-mass nuclei allow to study several phenomena of nuclear structure. Most notably, deformation parameters, both axial and triaxial, can be determined from the spectrum of their excited states. Odd-mass Au isotopes are known to exhibit multiple shape coexistence. Many configurations coexist at low excitation energies, resulting in an enormous density of excited states. In the seminar, a new data acquired with the TATRA spectrometer at ISOLDE facility at CERN will be presented. Excited states of the 181,183Au isotopes were populated through beta decay of the 181,183Hg precursors. Conversion electrons and gamma rays were detected simultaneously. The novel Broad Energy Germanium detector was used to detect gamma rays. Its supreme energy resolution, together with nearly ideal gaussian peak shape allowed to construct the level schemes of 181,183Au. An electric monopole transition was identified in 183Au.

Experiments at ISOLDE were complemented with in-beam gamma-ray spectroscope and isomer spectroscopy performed at the University of Jyväskylä. Combination of these approaches allowed to extend the systematics of excited state of odd-Au isotopes. New rotational bands and isomeric states, that do not have precedents in heavier isotopes, were identified. 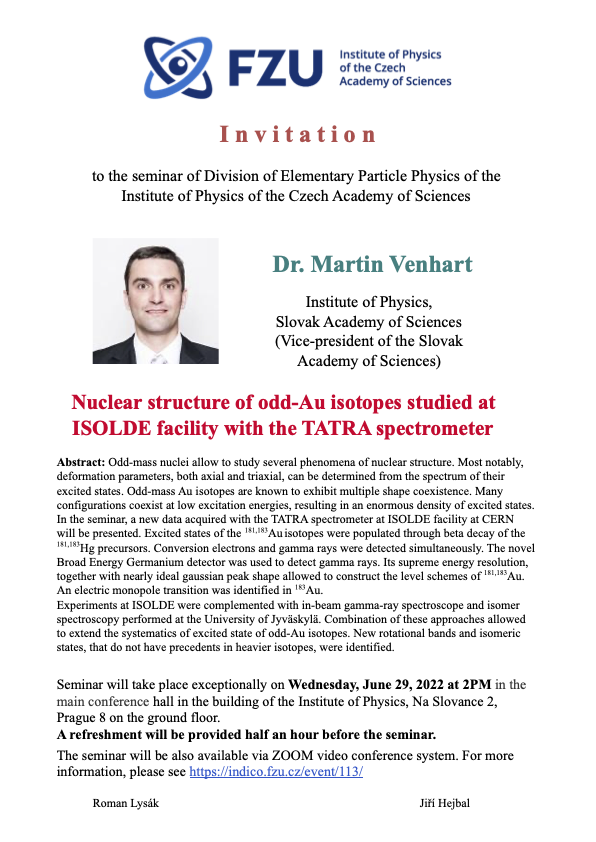